Half way to Silver 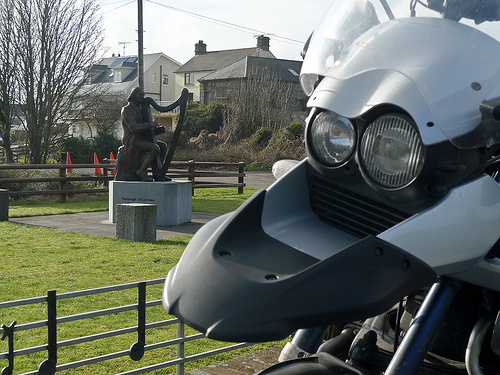 After I bought the bike back in January, I began hearing about an event called “Photo Rally” on a few of the bike forums. The idea behind it is simple, there are 24 locations throughout the island of Ireland and you need to travel to as many as possible to earn a bronze, silver or gold award at the end of the year. It’s not a recent idea either. It began way back in 1975 with a Limerick man. Looking especially uncomfortable for some reason. No, I don’t much like having my photo taken.

Photographing your steed with all 24 landmarks earns you gold, 18 gets you silver and 12 sorts you out with bronze. The idea behind it is to get out and have some fun on the roads, finding new places and meeting up with likeminded folks. I may only be 9 locations into the challenge, but I’ve managed to pack in all three so far.

It’s great riding out into the countryside to some off the beaten track landmark only to meet a perfect stranger and be able to chat at length about where we’ve both been so far, where’s next and where we don’t think we’re going to get to before the November 17th deadline. My God, the previous sentence almost makes me sound like an approachable, friendly sort. Maybe I can blame that on the photo rally too?

All but one of my visited rally points have been wonderfully obscure. On the tops of hills, back country roads and some in villages I never knew existed. The Fermanagh/Tyrone point almost lived up to it’s ‘tricky’ status by throwing a short section of off road riding in the way. I can’t imagine too many guys on sports bikes are going to manage or even attempt that one. The photography so far has been quite simple. Although there is an incentive to be creative, I’ve found it quite difficult to do so with the criteria. It’s a simple case of ‘heres the shot, heres my bike in the shot. rally point complete’. Maybe as the summer comes in and the weather heats up a bit I’ll be more inclined to stretch my photo rally creative photography legs.

I’m thoroughly enjoying it so far and I hope to get as close to photographing all 24 points as possible. There was even talk on a popular UK bike forum about running a similar event in Scotland. As if I needed another excuse to jump on the ferry to the highlands for two weeks!

Another part of Holland
Quick Exit

2 Replies to “Half way to Silver”