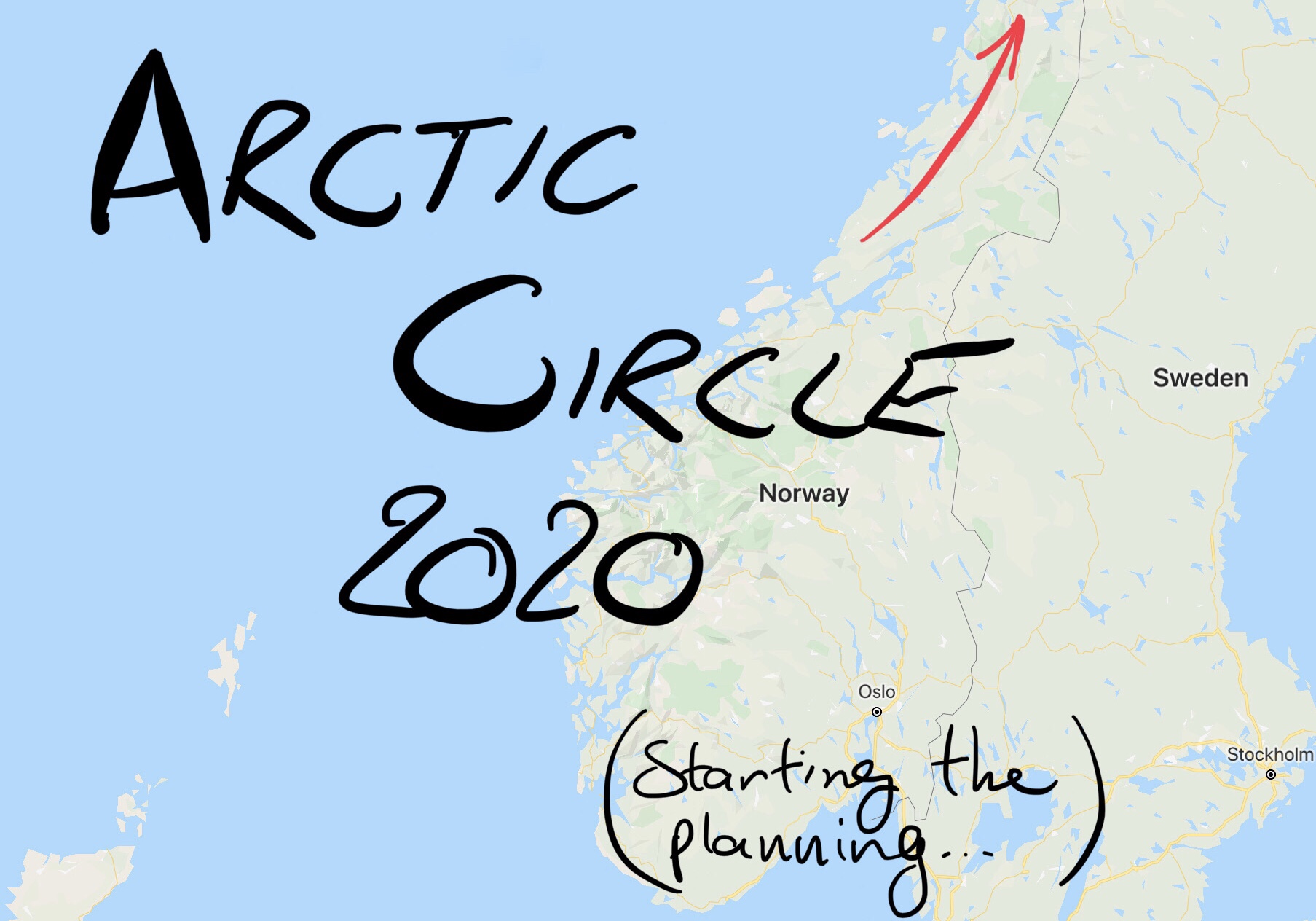 A camera pans around a small, messy room. Past a desk strewn with cameras, camera parts, empty coffee cups and notebooks full of hurriedly scribbled beer recipes, travel plans and other important things that need to be remembered. We see the figure of a disheveled man hunched over a computer, mumbling incomprehensibly. As the camera moves toward the subject, mumbling becomes swearing. The monitor of the computer now partially revealed, we see the sweaty, red-faced man pleading and bargaining with a seemingly meaningless sequence of dots and lines on the screen. Why won’t they just do what he wants? Why do they keep disappearing? The true horror is now revealed. The man is using Garmin route planning software.

Often, planning ahead for multi-night time spent on the bike happens in either of two ways.

1. If the destination is well known, the planning starts approximately 48 hours before the journey begins.

2. If the destination is only somewhat known, planning may begin up to 5 months before the journey begins.

Then there are the others. The outliers that require a little more thought. Let’s say those get anywhere from 6 to 8 months of thought, route googling and map staring.

But that’s not all. There are the ones that have been escalated to a kind of mythical status. Those that “I’ll do if I ever have that much time on my hands”. Those are in the same category as the “just quit my job and have 6 weeks to burn before I start the new job” kind of trips. Those can have years of planning, day dreaming and ‘what if’ scenarios attached to them.

One such trip was (is) Nordkapp in Norway. The highest point in Europe reachable by road. From Cork, Ireland (home), it wouldn’t be too far shy of a nine thousand kilometre round trip. Side note, you know Google maps is going to come back with an interesting number when it takes more than a few seconds to compute the route. Back when I was (I still am, but more on that later) thinking I could do it, I bargained myself down to there and back in three weeks. That’d be the same three weeks I could feasibly get off work in one go without too much pleading or soul selling. 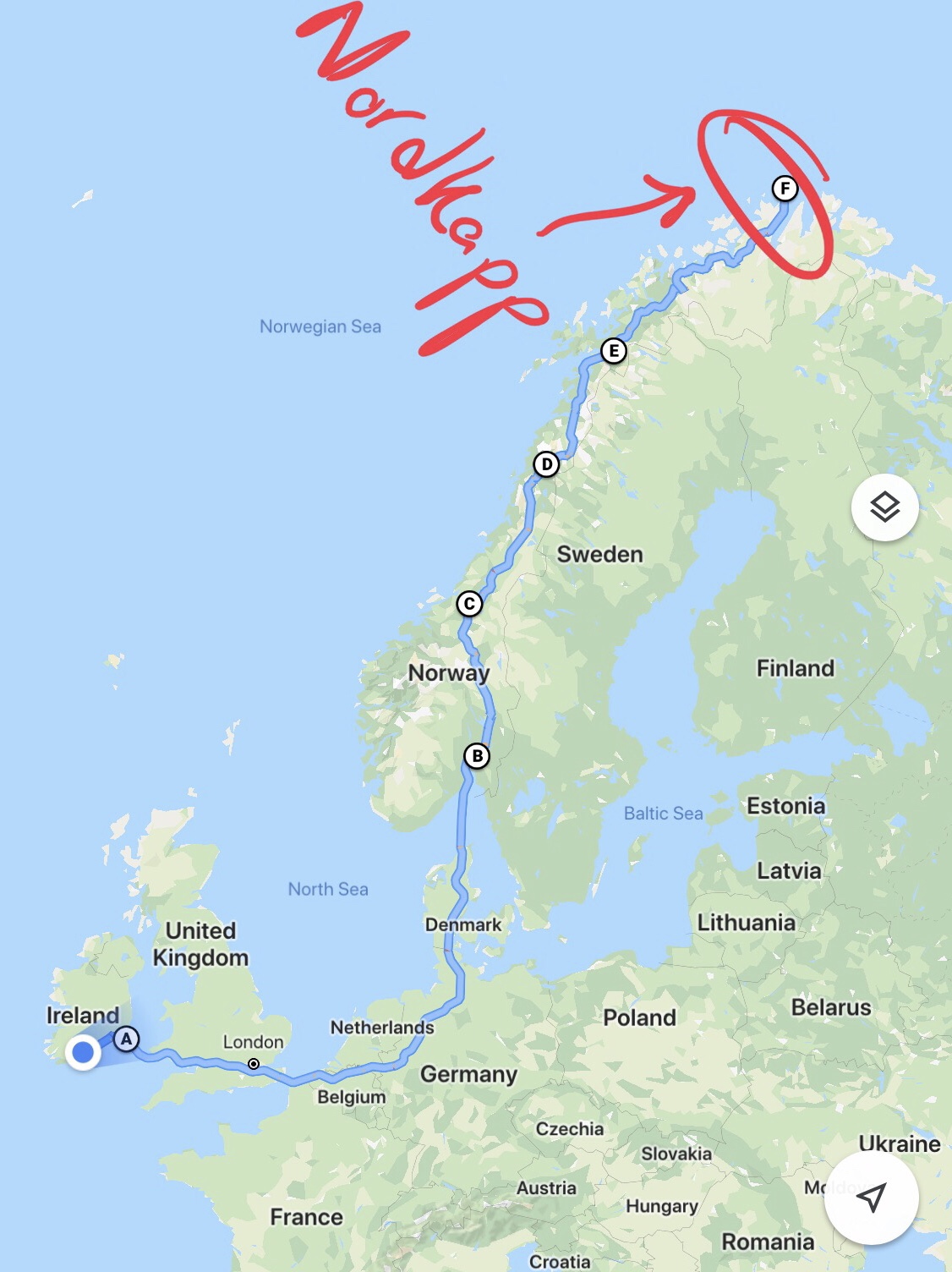 Even at that, I’d need to ride about 500km per day, every single day of those three weeks just to get there and back. No side trips to see interesting stuff/sights included. Add to that the idea that I could camp my way around to keep costs reasonable. In very short order I was informed that if that was the plan, I’d be doing it on my own. No matter how much I told myself I could do it, it was becoming less of a journey and more of a hard slog just to get to a place for a reason. A good reason mind you, or at least “because I want to” always seemed like a pretty good reason to me. Realistically, I’d need something between four and six weeks just to make it ‘fun’.

So it was almost forgotten about. Filed away in the same place as the journey around the Mediterranean Sea. It was possibly 2012 or 2013 and we were on the way back from somewhere on the bike, Wales or maybe France. In the queue to board the ferry in front of us were two guys who were possibly in their 50’s. As bikers tend to do when in a queue to board the ferry, there were brief exchanges about our experiences. Where we’d come from and how the journey had been so far. While the rest of us had come from the usual lap around France, spending a few days in the Alps or maybe just a weekend around north Wales, these two had freshly returned from Nordkapp. The phrases that stood out in the conversation were “amazing country”, “fantastic roads” and “something we’ve always wanted to do”. My poker face was as poor then as it is now and Julie could clearly see that the smouldering Nordkapp embers in my head had been fanned into a small forest fire. Yet as is my wont, I did nothing about it.

In my 20’s, I made a mental list of stuff I’d do ‘before I was 30’. In my 30’s (particularly as mid started to turn to late), I made another list of things I’d do before I was 40. There has only been one enduring item on that list, Nordkapp. For reasons discussed above, I had to come to terms that going all the way to the top wasn’t feasible right now. It’s handier when these goals can be nicely framed as a holiday, essentially killing two birds with one stone. There (may) will be another trip north to go all the way, so for now lets think of this as an intelligence gathering trip.

So Nordkapp became simply crossing the Arctic Circle. That takes nearly two and a half thousand kilometres off the total round trip and makes it a very achievable target within the regular two week (plus a few days) holiday period. 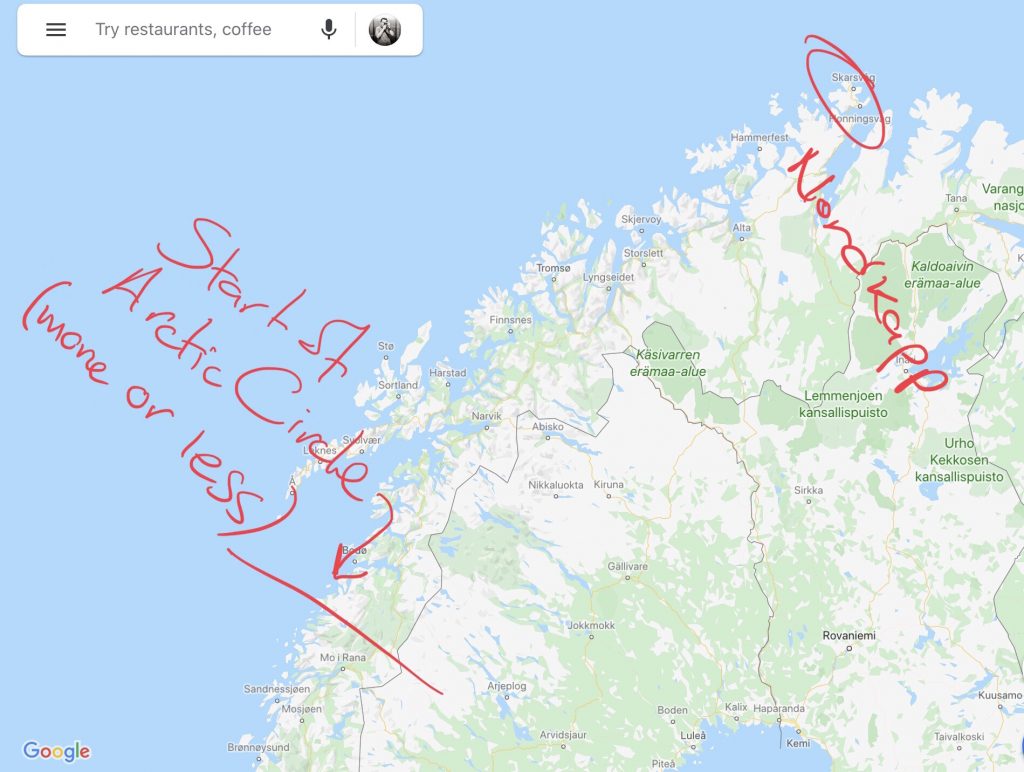 Buy a sticker, get my photo taken at the sign and eat a reindeer burger. Typical wholesome ‘tourist in the Arctic Circle’ activities. To stay on the right side of my ‘before I’m 40’ list, this trip moves up in the schedule to summer 2020. Next year. Otherwise, it’d be in serious danger of leaking onto the ‘before I’m 50’ list. A list I haven’t even begun to think about yet.

I pondered on just throwing money at one of the various motorcycle touring companies out there that’ll do everything for you. They book your hotels, ferries and tell you where to be and when to be there. I came to the conclusion (and after chatting to a few bikers about it) that it’s all well and good to do that if you’re going to far flung exotic destinations like India or Vietnam where there is complex paperwork, among many other challenges. Probably a little overkill for staying within Europe and where I can with reasonable accuracy get my point across using a mixture of hand signals and pointing at things.

Also, it’s quite a bit cheaper to do it yourself. I’m not knocking the tour companies in any way. The service they provide for people that maybe aren’t so sure about being outside their home country (or those that just want to turn up and ride) is stellar. You get two of the most comforting things when you’re away in a foreign country, a booked, vetted hotel at the end of a long day and a fellow traveler that speaks your language and can sort out any issues. But for me and I’m sure many more, a lot of the fun is in the planning.

The rough route, and it’s very rough right up to the point where we arrive on Norwegian soil, involves multiple possible ways to get from Cork to the Oslo region. Such was the complexity of the decision making process, a flowchart was constructed. Because nothing says ‘fun holiday’ quite like a flowchart. As you might expect, the below is only about a third of the glorious chart. 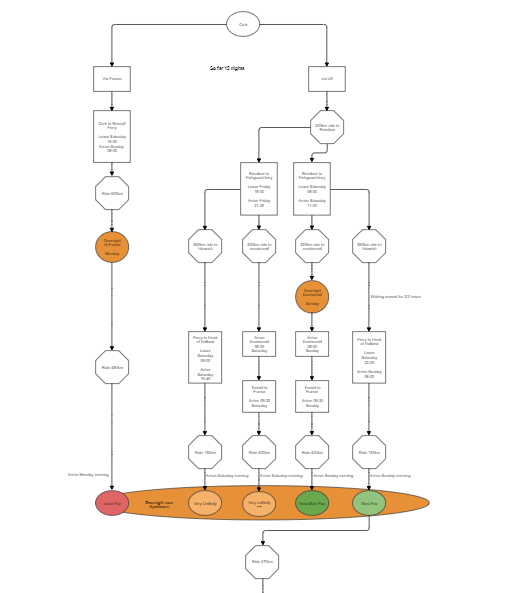 Right now, the favoured route is along the lines of;

If the Harwich ferry gets booked solid in early 2020, it’ll be the Eurotunnel. That’d mean a requirement to sleep somewhere close to the tunnel on the UK side (not Folkestone, for the love of God not Folkestone), get the tunnel the next morning and have a longer ride to wherever we end up stopping in Holland or Germany.

Two things I would have liked to do on the way to/from Norway was to see Denmark and ride across the Øresund bridge to Sweden. I guess I’ll keep that in my back pocket for a future ride to Denmark/Sweden/Finland.

Instead of heading north through Denmark to catch a ferry to Norway, there is a very fancy overnight ferry (more like a cruise ship really) from Kiel to Oslo I just need to get my head around how breathtakingly expensive it is for a return ticket. What’s helping there is the similarly high prices of ferries from Hirtshals in northern Denmark to anywhere in Norway. Plus of course the cost of getting to northern Denmark in the first place. I’m also going to have to get my head around everything costing twice what it usually would. Norway, I’ve been advised, is not the place to go if you fancy a cheap two week holiday.

As I’ve alluded to above, the plan B for the Germany to Norway portion of the journey is still to hoof it through Denmark, bask in a brief bit of hygge, then get one of the ferries to somewhere near Oslo. That’d probably cost an extra night though, with the additional ground to cover. Moral of the story here is to firm up some dates and get essential transport booked. Denmark should and can wait until we can get back there to see it properly and not from the side of a motorway.

We’d now be in Norway, so the fretting and fussing about booking ferries and catching said ferries can take a back seat for ten or so days. I’ll get that much sorted first, then worry about what to actually do when we get to Norway.

Around Sligo
All that is old is new again

One Reply to “Working on Lists.”