Part 1: From Here to Mediocrity 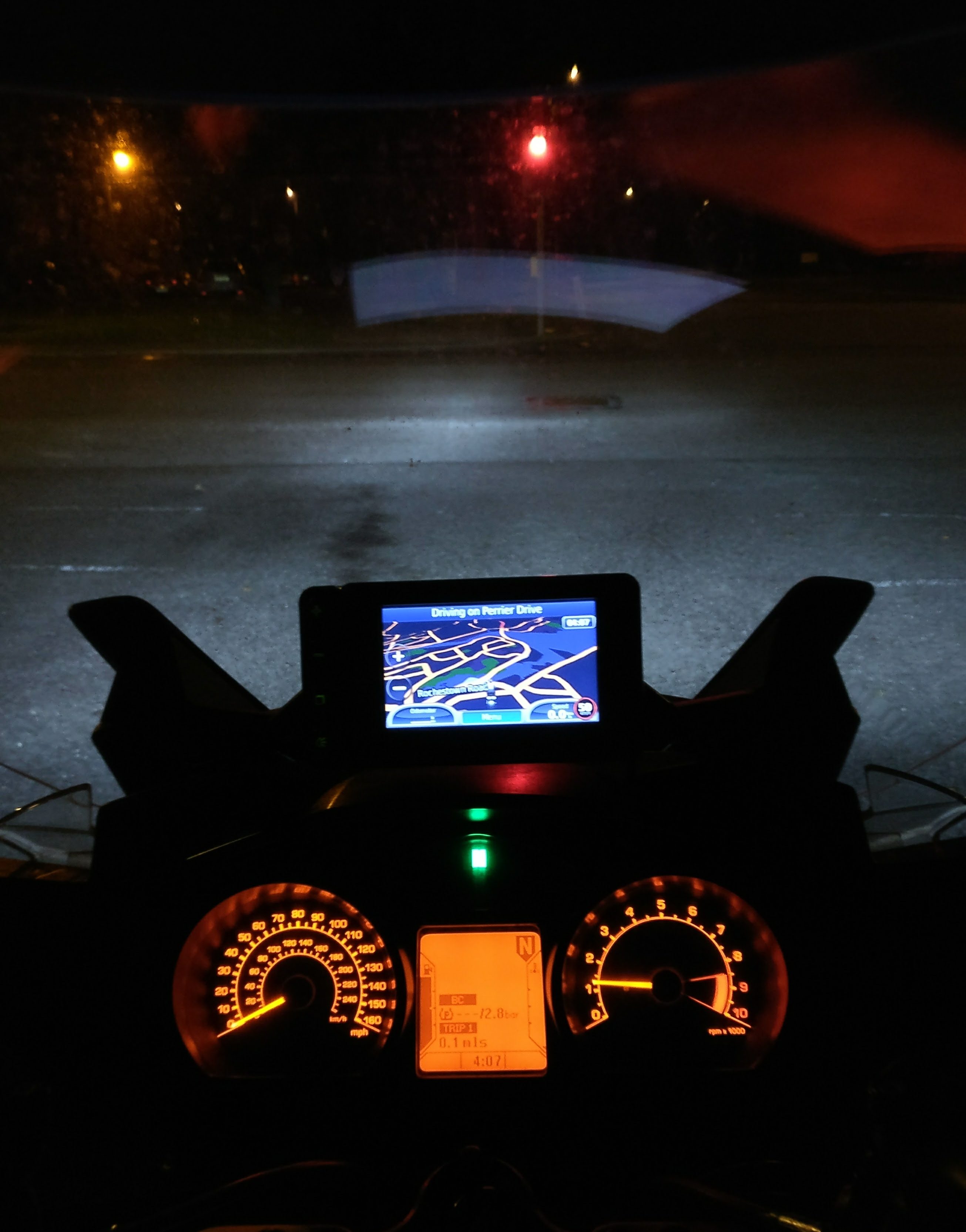 I had a grand plan. It was mostly successful. With the summer doing it’s usual death rattle in mid July, my window of opportunity to actually see something outside of Ireland was closing fast. As we had started looking at the possibility of buying a house in March or so, any possibility of going anywhere off in foreign parts was written off as luxuriously frivolous. But if we know anything about me, it’s that I’m a stubborn little shit. In my defence, I blame YouTube. Watching multi-part videos of guys (who admittedly already live in Central Europe) take off for a long weekend or a week to the mountains had gotten to me in a major way. A way that couldn’t be ignored. Before the long, dark, rainy nights rolled in, I need some decent roads and something resembling sunshine.

In my usual way of poorly planning the shit out of something, I left it too long to take some time off from work. So I ended up with two weeks in mid-September to play with. Not exactly ideal Alps weather. Not exactly ideal ‘going anywhere on a motorbike’ weather really. Also in my usual habit of procrastinating to an Olympic gold medal winning level, I hummed and hawed about actually booking anything for a few more weeks in August. In the end, I booked the entire ten day trip over the course of two days in the dying days of August.

The rough plan was to get to Eastern France, see some more of the Black Forest in Germany and somehow fit in a few days in the Alps in France, Switzerland or Austria. Austria seemed like a long shot. But then I guess this whole trip is a long shot.

I was going on my own, entirely unsure about my ability to spend ten whole days and nights in my own company without returning an even more raving lunatic. I was also going to at least three countries where I didn’t have an all too firm grasp of the local language. I settled upon a Rosslare to Fishguard ferry, followed by the channel tunnel the next morning to bring me into the land mass I needed to be on. I figured that if by the time I got to South Wales and started suffering very cold feet (inclination to go on, rather than weather induced), I could put myself on the next ferry back to Rosslare and write the whole thing off as a learning experience. It seemed like the soft option, compared to jumping on a sixteen hour ferry crossing from Rosslare to Cherbourg. The downside? A 4am start from Cork to make the ferry in plenty of time, allowing for minor mishaps along the way.

With Julie having flown out to Holland the previous morning, I was surprisingly full of beans springing out of bed at 3:15am on the morning of the kick-off. I loaded up the bike (that I’d been so wise to do 95% of the prep for the night before) and as quietly as I could, rolled it down the driveway and onto the road before firing it up and letting it idle for a few minutes while I fixed my helmet, gloves, music and did my usual pocket patting routine to make sure I have my phone, wallet, and keys. The same routine I’d do if I was riding the 10 minute journey into the city to buy beer. 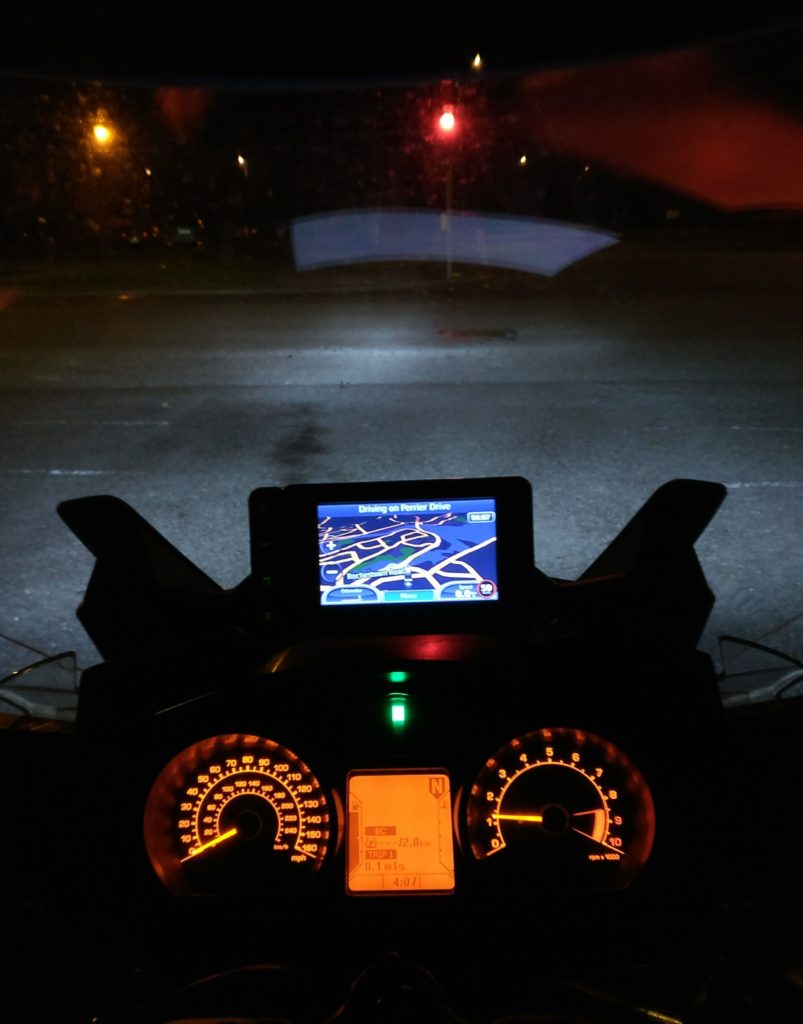 As I pulled out of the estate, I was stopped by a red traffic light and it gave me time to consider that I had never been on the bike this early before and certainly hadn’t traveled the distance I was intending to on my own before. “It’s an adventure I suppose” is what kept me pointing in the right direction for the first 40 minutes or so.

The ride to Wexford was very uneventful, given the early hour and the lack of traffic on the road. I was free to fully enjoy the spectacle of riding toward the sunrise, even though by the time I reached the port it still hadn’t brightened up sufficiently to call it ‘daytime’. On boarding the ferry, I thought I might chance a bit of breakfast. Well, a lot of breakfast given that the only thing to pass my lips so far was a cup of tea at a nearby petrol station to warm myself up a bit. “Good thinking”, the guy serving the food said. “Better to get some food into you so when you start vomiting, you’re not doing it on an empty stomach”. Oh. Right then. Apparently the previous crossing from Wales had been so bad, the crew hadn’t even slept. Helpful sort of chap that I am, I shared the good news with the only other two bikers on the ferry.

Three and a half hours later, we docked in Fishguard. The sea had calmed significantly, I think I even got a few minutes sleep, lulled by the almost gentle rolling of the ship on the waves. My only memory of arriving in Fishguard was the GPS sending me the wrong way, through mazes of tight, windy streets. Not the best beginning but not entirely unexpected. After a short scenic detour north I got on the dual carriageway, then on the motorway. It remained that way for hours. The monotony was broken briefly by the Severn bridge but that was an all too short distraction before motorway began once more. In all, it was about 8 hours or more by the time I got to the general Folkestone area. The traffic approaching London was typically horrific and left me needing to filter between stationary cars for what seemed like at least an hour. Chance of rough crossing notwithstanding, I wish I’d been on the Rosslare to Cherbourg ferry.

But the traffic thinned as I got onto the M20 and soon enough I was seeing signs for the Channel Tunnel. Yes, it’s possible to ride from Cork to France in one day. The arrival in France would be horribly late, but it’d almost be worth it.

That ‘almost be worth it’ became ‘totally worth it’ as I rode on past the signs for the tunnel and onto my destination for the evening, a cheap B&B in Folkestone. I had imagined Folkestone to be a quaint little seaside town, somewhat like a played down (very played down) version of Blackpool in the north west of the country. The kind of place that was a hit in the 80’s / early 90’s and always thought it could regain it’s popularity. It was sitting there on the end of the country shouting “I used to be cool, then they changed what cool was”. It was shouting, but apparently nobody was listening. Folkestone has all the charm of a brick to the face. Not a fancy brick either. A brick that was used in a 19th century septic tank and has been infused with decades of human filth. No, I didn’t like Folkestone. As tired, hungry and cranky as I was, it would probably have been hard to like anywhere. I ‘checked in’ to the B&B / halfway house / B&B and was advised that the best place to go for food was ‘to the ‘spoons’. Wetherspoons pub, ten minutes or so walk down the road. So I strolled down to the ‘spoons to sample the local flavour. Then I walked straight past the ‘spoons. The kind of walk you to when you see someone on the other side of the street that you really want to avoid making eye contact with, lest they try to strike up a conversation. The pavement suddenly became hugely interesting. The ‘spoons was oozing. I’ll say no more.

As I was contemplating cooking and eating my own leg as an alternative, I happened upon a beautifully empty restaurant that seemed to serve all the fixings that a contemporary hipster has become accustomed to. Which was a bit crazy. It seemed this lovely, clean, well lit restaurant had just fallen from space and landed in a perfectly sized space between a bookmakers and yes, another bookmakers. So I dined on a reassuringly expensive beef brisket thing with other fancy stuff on the plate and washed it down with a run of the mill but very welcome craft beer. I was even considering indulging in dessert until a group of 12 or so cookie cutter loud Londoners ambled in, all wearing the same denim shorts, all sporting the same haircut and all taking turns to prove themselves the biggest asshole in the room. The verdict is in, you all win.

So instead I went back to the halfway house. Or at least I tried. It was bright outside when I came in here, now it’s not so much. Tired as I was and with a couple of pints inside me, I had to consult Google maps, a compass and a topographical map several times to figure out which direction I should be walking in. That was moderately stressful, but I’m sure hilarious beyond all measure from the perspective of an onlooker.

All in all, the B&B did it’s job and I woke up the next morning with all my internal organs in the same place I left them the night before. Result. Also, the bike was still there. I was on a roll. I got myself together and packed up the bike, searching for any sign of human activity in the B&B. Mostly for whoever it was that was going to make my breakfast. Long and relatively uninteresting story short, I did eventually get breakfast. Well, I got two slices of questionable toast and a bowl of stale cereal. “What time did you book your cooked breakfast for?” Eh, I didn’t. Because I was never told I needed to. Perhaps that was a bullet dodged. The cold but sunny start woke me up quickly and once I finished hostage negotiations with the GPS, it pointed me toward the tunnel check-in. Onward!

Way Out West
Part 2: Across the water and into the forest

One Reply to “Part 1: From Here to Mediocrity”