Part 4: The road to Tyrol 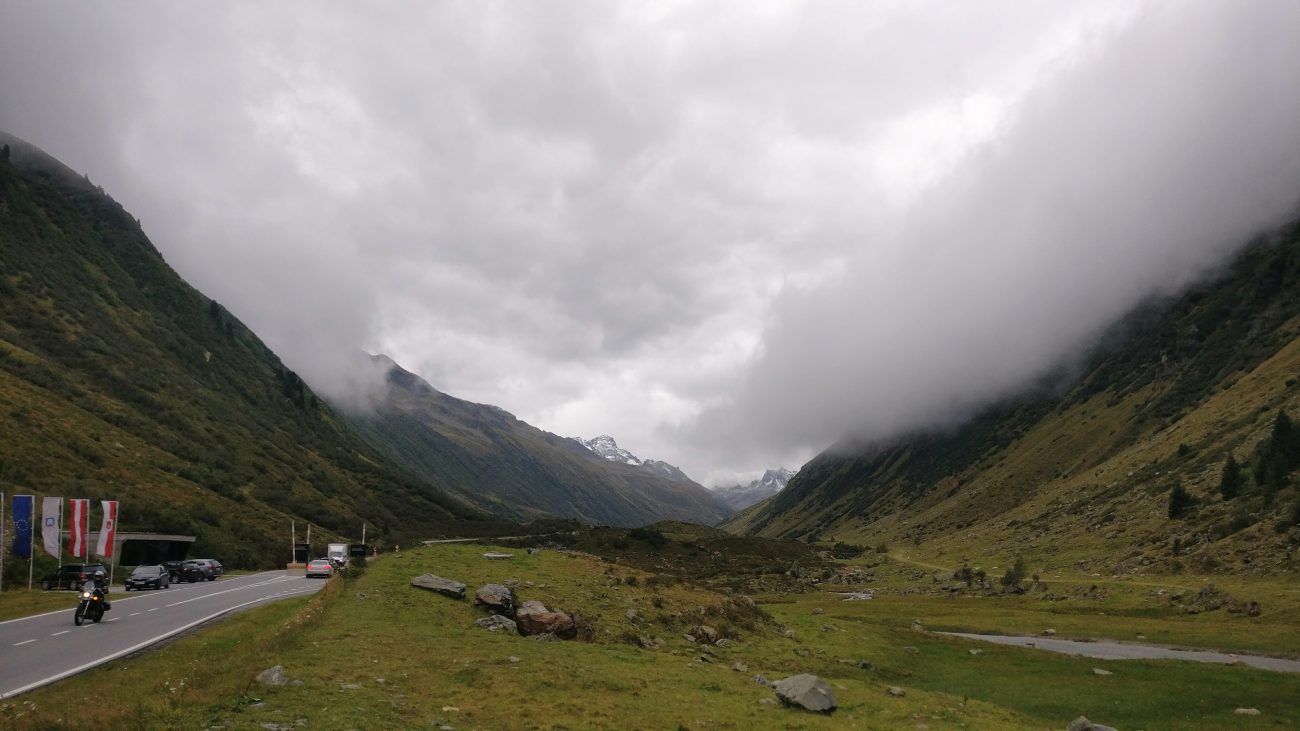 I woke up in Kempten and the first thing I did was to have a cautious peek out the window. Cautious because I didn’t want to see any rain and my room was directly overlooked by a dozen others. I didn’t want to give any unsuspecting guest more than their share of horror this early in the morning. Wait. Sunshine? What?

I pulled on the minimum amount of clothes required to be presentable at breakfast and then proceeded to pack my face with as much of the bread, cereal and tasty tasty German sausage selection as I could. If I was going to miss lunch again today, I thought I’d get away with it by being still full from breakfast. If I had been wearing my bike jacket during breakfast, I probably would have stuffed all of the pockets with meat and cheese.

A swift payment and checkout occurred, and I was into the open air. Yes, it was still sunny. Cold, but sunny. I’ll gladly take it. I was outdoors for longer than thirty minutes and my clothes were still dry. Compared to yesterday, this was nothing short of remarkable.

I’ve only ridden south from Kempten into Austria a couple of times now, but the sight of the mountains in the distance and knowing that’s exactly where you’re going is quite the thing to keep you motivated and moving. But I was still in Germany, so speed limits are a thing. I crawled out of Kempten at an average speed of about 20km/h. With the awesome mountainous vista laid out in front of me, moving at this speed toward them was painful.

In case you haven’t already guessed it, my main reason for this trip was to get onto some lesser traveled mountain roads. Specifically, those in Germany, Austria and Switzerland. Due to time constraints, I did have to cut my visit to Switzerland very short, but made a deal with myself that I’d be back there soon. Even found the perfect small hotel in the middle of a few of the more spectacular passes.

I did eventually cross the border into Austria and made my way south toward Plansee. Given how early in the day it was, I thought I’d take a brief detour toward the lake and see how or if it’d changed since I was last here in 2012.

It hadn’t changed. Just a lot quieter and colder. Remember what it looked like in 2012? 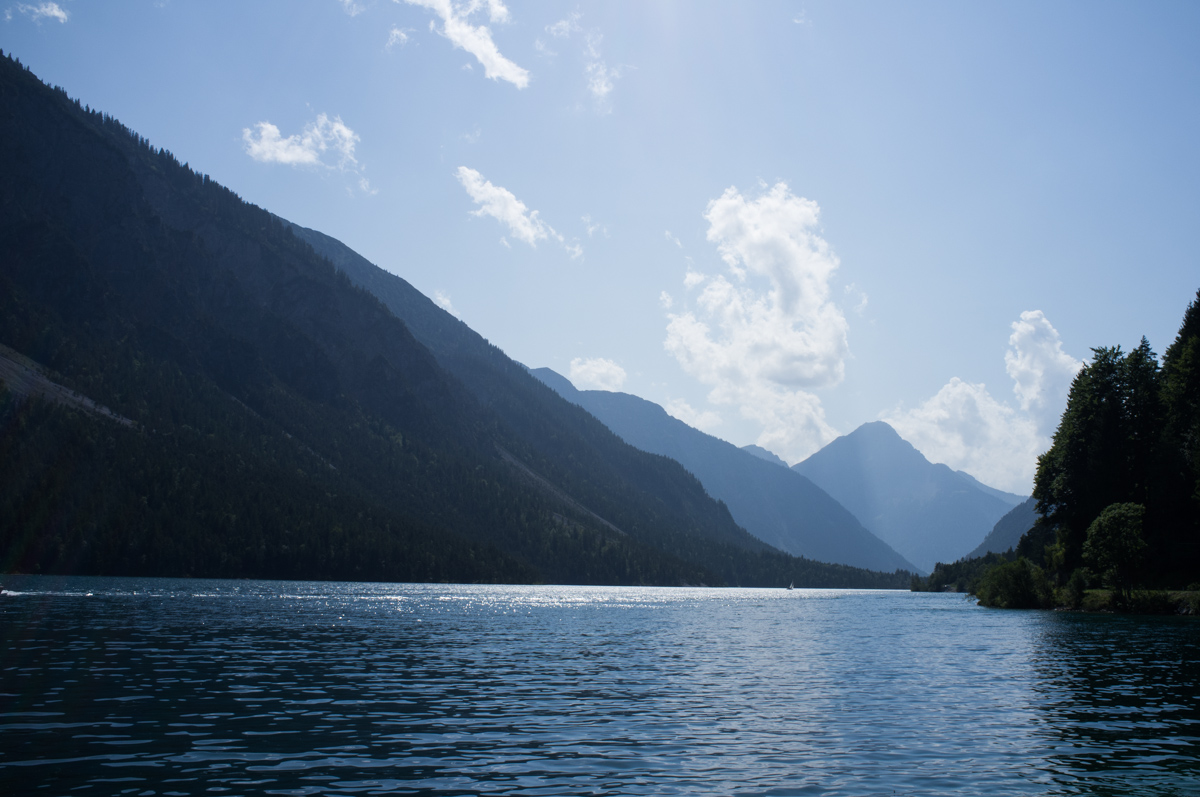 The notable exception on this visit, strudel and coffee. That and the peace & quiet to enjoy it in.

I spent more time than I’d planned on at the lake, strolling around and taking crappy photos with my phone, much like those I’ve been using throughout this series so far. No, I didn’t bring a proper camera with me, partly because I wasn’t really staying still long enough to warrant the additional item to carry. On a few occasions during this trip, I had begun to regret that decision.

After a conversation about ‘how good my bike was’ with a friendly English couple that turned up on a 125cc dirt bike, I packed up and made my way back toward my planned route, down into the Tyrol valley and onto Galtür. Hit the Fernpass not long after leaving Plansee and with it, all the trucks and camper vans you can or should possibly cram into a winding mountain road. Add to that the impatient guys on sportbikes trying to pass everything out without a care in the world for their own safety. Although I’ve only ridden on the Fernpass a couple of times, it always proves to be interesting.

I passed Landeck, where we stayed on our first visit to the area back in 2012, and from there, lost all perspective of how long it’d take me to reach the hotel in Galtür. It was still pretty early in the day, probably too early for check-in, but the temperature was dropping and the further I got into the valley, the more the clouds gathered around the tops of the mountains.

Given how early I was, I rode on past the hotel and up to the Silvretta toll booth (above) to do a quick weather check. Either the wind had picked up significantly or the shape of the valley was just right, but the speed at which the clouds whipped down the side of the mountain and up the other was mesmerising. I stood there watching it until the first few drops of rain of the day broke the trance I was in. This was one of the roads I was planning on riding a lot. If you stay in a hotel in the Silvretta area, you get a pass that allows you to do all sorts of things for free. Take the bus, use the ski-lifts, that kind of stuff. But it also allows you unlimited access to the Silvretta high road. Almost like I had planned it this way. I thought I’d get best use out of the road on the day I was leaving and heading into Switzerland for a flying visit. More on that later.

I retreated back to the hotel, checked in and then realised my lack of German was going to continue to screw me throughout this trip. Thankfully, the staff at Hotel Valisera were patient and had significantly more English than I do German.

The first thing I saw when walking out of the hotel that evening was the sun just touching the tops of the mountains. This was going to become a familiar sight, although with much more snow.

Full-board in the hotel turned out to be one of the best decisions I had taken when planning this trip. The food kept coming and I eventually had to tap out at about course 5 or 6. I retreated to my room and watched the weather on my phone. Minus 5 degrees overnight you say? That’s going to be interesting. I immediately thought of the possibly dodgy battery in the bike and had some harsh words with myself for not getting a new one before leaving on this trip. Feck all I can do about it now, might just have to figure out how to get to the nearest bike shop (a couple of hours away) in the morning if everything goes sideways.