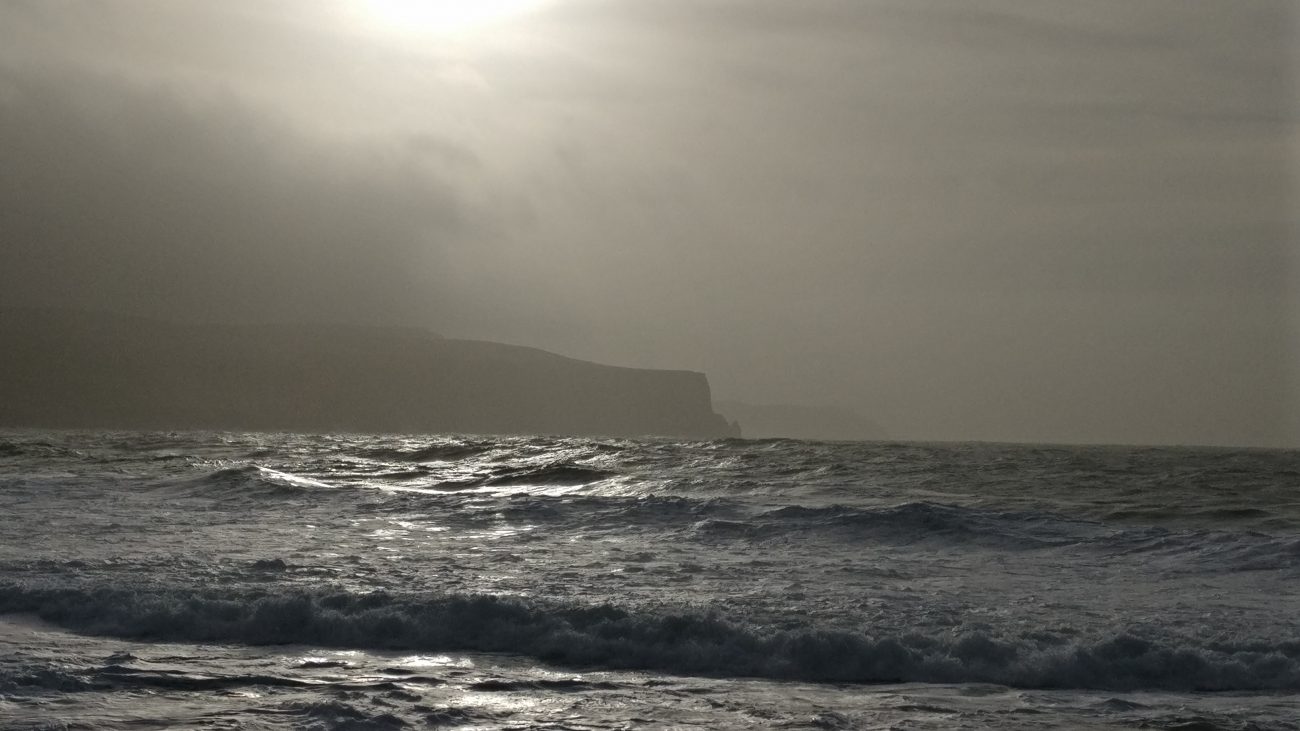 During this ‘extended Christmas break’ I’ve been indulging in before I start the new job, I thought I’d take advantage of the unseasonably mild winter weather we’ve been having so far. Take advantage of as in get out on the bike. This decision was also partly brought on by having the wind knocked out of me in mid-December when I got the renewal for my motorbike insurance policy. It’s an awfully large expense for something that (lately at least) gets used very rarely. So like a good Irish person, I became determined to get my moneys worth out of the dirty scamming bastards at the insurance companies by actually using the bike more.

As one or two pushes is never enough for me to spring into action, the final push came when I saw the weather forecast for the remainder of the week. Sleet, snow, and temperatures mostly around the region of three to minus three. Not exactly biking weather.

Off to The Burren to eat a sandwich, then turn around and come home. Not entirely unlike the famous (depending on which circles you move in) “Fish & Chips run”, where a load of lads from Dublin hop on their bikes and ride to Salthill in Galway for, well, fish & chips. Not sure if they still do that one actually. Certainly not in January anyway.

First stop was Lahinch, which has been helpfully corrected on many signs from Lehinch. Nothing outstanding here, everything was shut. Just stopped for a quick instagram, milking the last of the “while you’re at work, I’m at X”. The kind of shitbag stuff I’ve been doing for the last couple of weeks. 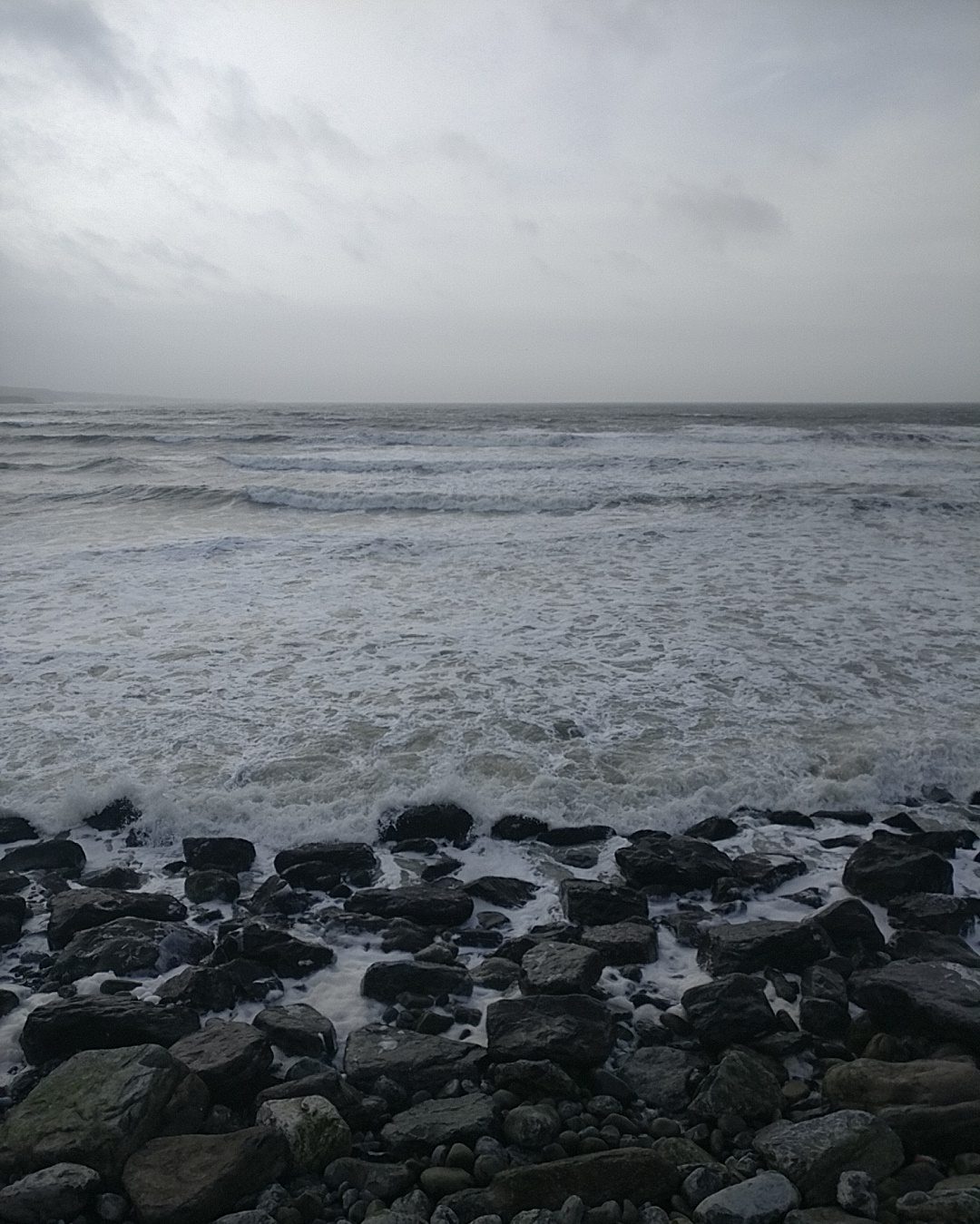 Next to another regular stop, Doolin. It was right around this point where I regretted not bringing a proper camera. You know, one with glass lenses what with the moving of the bits of glass to make the far away things be not so far away and the fuzzy things not so fuzzy. This only being my second stop, you could say that I pretty much immediately regretted not bringing the big glass out. The best camera may be the one that you’ve got with you, but that doesn’t mean you can’t swear out loud a lot when you can’t get the shot with what you’ve got.

On the way to this stop, I did briefly consider stopping at the Cliffs of Moher, then didn’t bother when I saw that the car park was still open, so they were still scalping for entry to it. Also, I was cold and had the heated seat turned on at this stage. So that too.

What follows is the usual coast road route I practically always take when in the area, what for photographing the many different types of foreground rocks. Then a light lunch of sandwiches made with potentially bad ham (as in, went off a week or so ago), washed down with the last can of Irn Bru that was in the fridge. 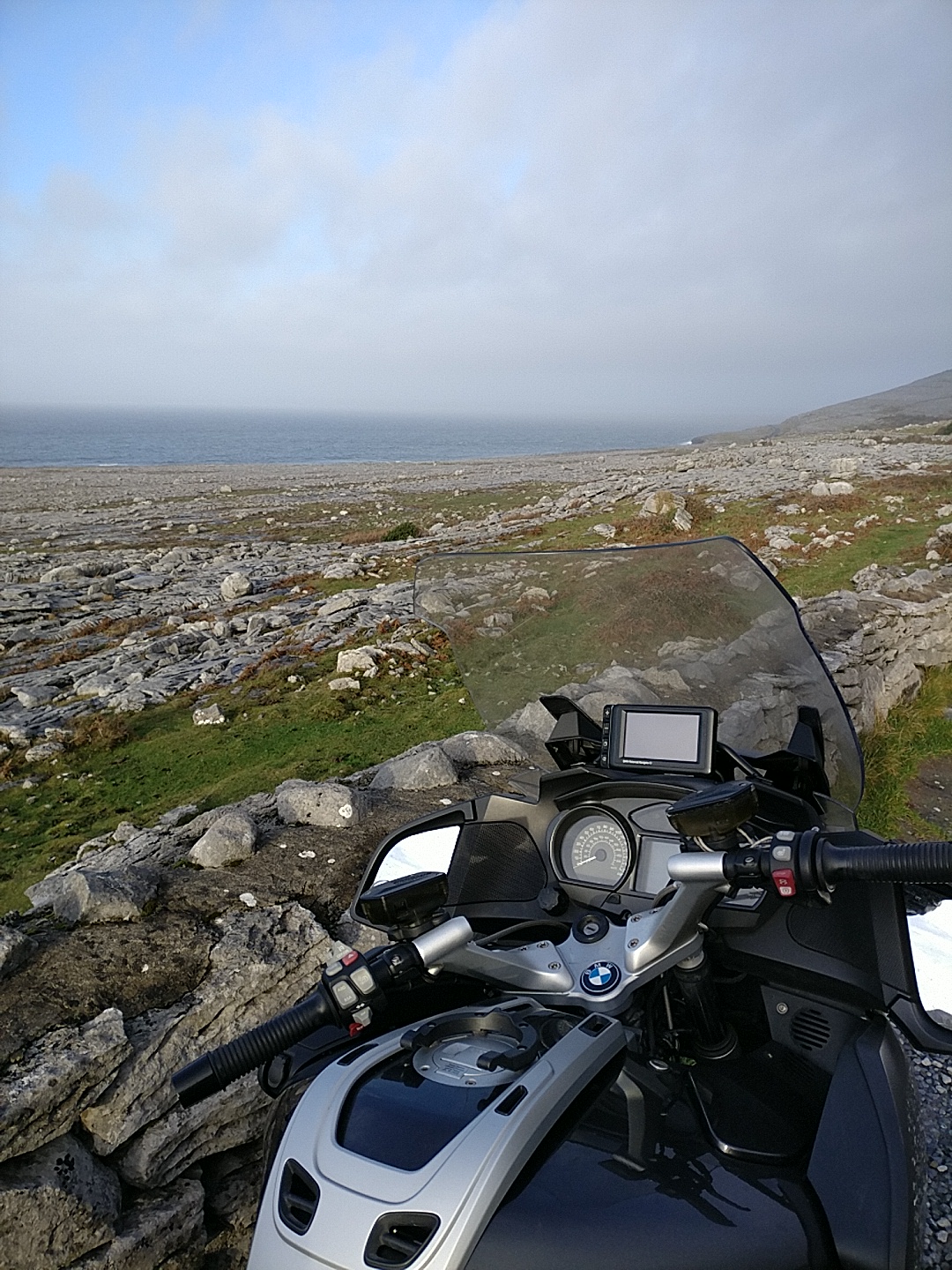 No, I didn’t actually need to bring the GPS to find my way here. I brought it mostly because it hasn’t been powered up since the last trip to France so wanted to make sure it still worked ok. Or at least as ‘ok’ as it usually works when we’re away and depend on it to get around. It’s also sometimes handy to know exactly what speed you’re doing for explaining to the officers that you couldn’t have been speeding on this ‘pipe & slippers motorcycle’.

Coming around the coast road and stopping here to sit on the wall and eat my lunch reminded me of the wonderful phrase “you never see motorcycles outside therapists offices”. It was bloody cold, it looked like I was going to get a torrential downpour at any minute and the bike may or may not start back up (dodgy battery I think) but you couldn’t buy the peace of mind I had when I took the above photo. Kinda put the last few shitty months into perspective. Now, before I break out the healing crystals and attempt to cleanse your aura, on with the show!

Anyhow, onto Ballyvaughan then back the less than perfect road past Aillwee Cave and the Poulnabrone Dolmen. Neither of which I stopped at. Because January, 10 degrees and heated seat & grips. I did have a mad notion of heading east as far as Nenagh and coming back down the M8, but it was way too late in the day for those kind of off-piste shenanigans.

So now all I need to do is figure out ways of tricking myself to get out on the bike more. I may do part of the photo rally this year. At least the part that doesn’t involve going to the farthest reaches of the other side of the island anyway. I may also produce some kind of motorbike video blog, moto video blog. Moto vidog. Motovlog. I guess that’s pretty much what I’ve done above (and pretty consistently on this blog for the last number of years). You just get to read my random stream of consciousness, instead of having to listen to a stream of the utter horse shit that passes through my head when I’m out on the bike. Oh and swearing at other motorists. That features heavily. Hey, stick around, you might learn some new swear words!

Last of the evening sun
Part 1: From Here to Mediocrity

One Reply to “Way Out West”