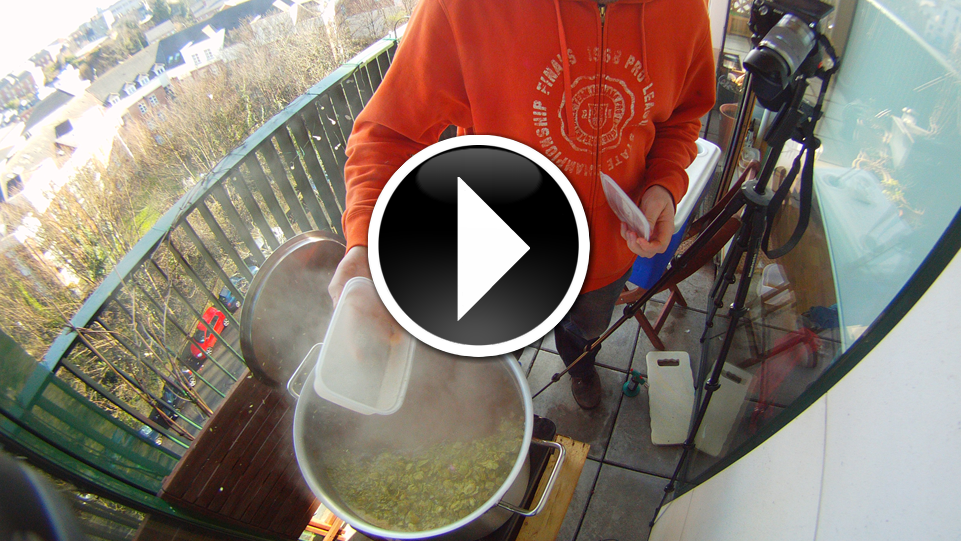 I think I can call this the first brew day of 2013, given that my last brew day was New Years Eve 2012. I decided to try a bit of time lapse video with this one. Nothing too well planned as you can probably tell. Just stuck up a few cameras and took it as an experiment to see what I came up with.

As you’ll notice from my furious re-positioning of cameras and tripods, I also shot some video on my Nex but haven’t dared go near that yet. More scripting and story boarding required on that venture for the next brew I think.

This was a Sierra Nevada Pale Ale clone, about 5.1% abv and in around the 40 IBU mark if I remember correctly. The original brew day plan was to brew up a batch of high abv porter to bottle for Christmas (I never said the ‘C word’ by the way) but as I’d stupidly forgot to buy any chocolate malt on my last trip to the home brew supplier, the SNPA clone would have to fulfill my need to brew something for now.

It’s a little over a week since it went into the fermenter and now sitting pretty at 1.010, down from 1.049. It’ll be transferred to secondary tonight and be treated to some Amarillo hops for about another 5 days.

In related news, this is one of those rare occasions that I appear in content posted on my own blog. I’m not going to be making a thing of it, don’t worry. If you should feel the need to view the video bigger and in HD, head over to the Vimeo link posted under the video.

Build me a Beer Cooler (Part 1)
From here to Italy