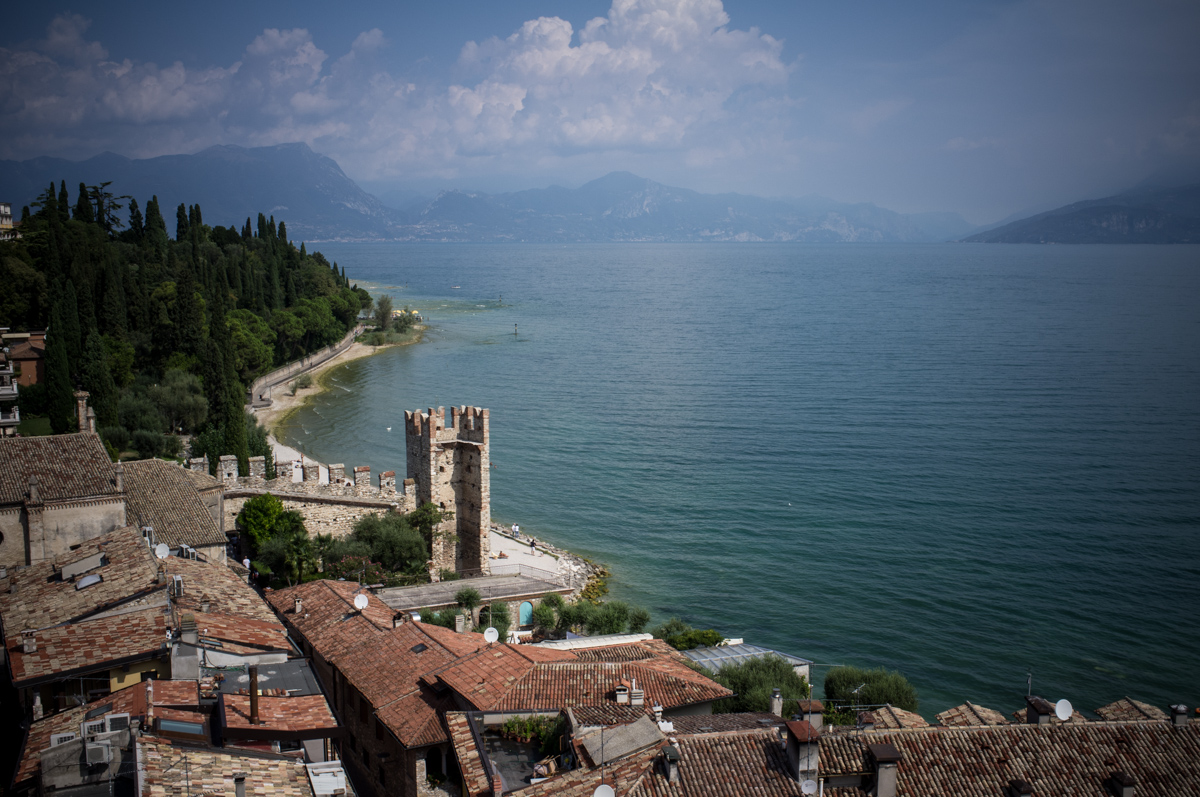 “Europe 2012; Part 2” I suppose. Having dropped the bike at the hotel and received the ‘standard Italian warm welcome’, we retreated to the cool shade of our room. Before I go on, (and I may have brought this up in the last part) I’d never been to Italy before now. To be honest, with so much of France, Germany, Austria and Switzerland to see, I wasn’t really too bothered. Mostly due to (some of) the people. Call me a horrible racist or a xenophobe if you want. The ‘standard Italian warm welcome’ is something we all seemed to receive as we arrived at the hotel and something I’ve received outside Italy on a few occasions.  To me, it’s the sour faced look and general ‘what are you doing here and why are you bothering me?’ demeanor. Or, probably pretty much the same look I give people at work five days a week. Maybe I’m quarter Italian?!?

But ignoring that; It was warm, sunny and there was a wonderfully refreshing breeze blowing in off the lake. Our room looked out onto the lake (as you can see below) which made for a lovely waking experience first thing in the morning. Decidedly different than looking out over Dublin 8.

Breakfast wasn’t too bad either, a bonus given that we were here for a couple of nights. Before arriving at Lake Garda, my intention was to spend our first full day back on the bike. We’d head up the coast toward Limone, a place I had been advised to visit by my family. All best laid plans went to hell once the bike gear was peeled off however. The bike had been safely deposited in the smallest underground car park I’ve ever seen (basically, a store room with a car lift) so the urge to hassle the hotel staff to operate the lift so I could get the bike back to ground level never really struck. Instead, my pasty white legs went on show around Sirmione, much to the entertainment and general gasps of horror from both the locals and the already tanned and leather skinned tourists.

It turned out that we were only a few minutes walk from Sirmione so instead of taking the boring option and eating at the hotel each night, we ventured into the tourist swarmed town to be gouged by the local restaurateurs. And gouged we were…

The holiday buzz was in full swing now. Eating outside in a packed courtyard, drinking overpriced sub-standard beer and winding it up with eating our own body weight in gelato. Twice, if I remember correctly. The evening walk around Sirmione was only cut short by a mosquito invasion, which ultimately saw us retreating back to the hotel for yet another overpriced sub-standard beer or two before retiring for the evening.

Fresh as a daisy the next morning. Or, a daisy made from molten lava anyway. The air conditioning in the room wasn’t very effective; Consider what would happen if you put an ice cube in an oven.

Breakfast was shared with dozens of tiny birds that dive bombed us for every loose crumb on the table. They could have the pastry crumbs but the coffee was mine damn it!

All notions of getting the bike out and riding to Limone were once again lost at the realisation of having to pile the all black bike gear back on. Another day in Sirmione it is! The rest of the group had opted to rent boats and go out on the lake for the day, but as neither of us are swimmers (or really wanted to spend the day on a small boat), we took the landlubber option. We did get out on the water though, courtesy of a local tour company that provided sufficiently lengthy trips around the peninsula.

We got to see the ancient villa, some famous persons house that something was named after, another view of the fort on the east side of the town and stopped directly above the hot spring that opens out into the lake. Yes, you can see I was paying full attention during the boat ride. I can’t even remember the guys name. All I really remember is that we were the only two people on the boat (aside from himself at the controls of course) and he was a very friendly mind of local information.

Interestingly enough, he was also dying in the heat and was telling us that 38 degrees wasn’t normal for the area at this time of year. Good to know in case we ever come back.

Back on dry land, we agonised for a few short minutes over where to eat lunch, then finally chose a lovely out of the way kind of spot and had a very long, very relaxed meal in the usual Italian style.

I climbed a tower that allowed the above and below photos, impressive views over a tightly packed in town. As I climbed to the highest point to take the photos, Julie opted to remain one level down in the shade. She may have seen what lay in store for me as I ascended the narrow stairs to the top. Outside in the sunshine on the top of the tower it was a general melee of bodies that would have sent any health & safety officer into a fevered panic. People were trying to push their way down the stairs while people were coming up, that kind of thing. In the end it took some forceful visitor (not me by the way) to orchestrate the whole thing, herd people like sheep and and get the whole mess moving. I wasn’t about to do it, I was on my holidays.

Honestly, I can’t remember much of the rest of the day. That’s a good thing. We wandered around for a bit taking photos, dipping our fingers & toes into the water and generally enjoying the sunshine, the relaxed atmosphere and most importantly, each others company.

Dinner was picked in a similar fashion to lunch and we ended up eating monstrous pizzas that cost pretty much nothing (compared to some of the other eateries anyway). We were back on the road tomorrow, a thought that hadn’t even entered our heads at this point. That dreaded ‘holiday half way point’ feeling hadn’t struck yet either thankfully. Both thoughts were drowned out with more gelato and some more aimless wandering around the town.

I’m not sure I’d make Lake Garda a ‘must visit’ destination for any future (two up) European biking holidays, it’s just too much of a haul to get there. I’d probably fly in then rent a bike for a few days if the urge struck. It’s a great spot with some great weather but too much lounging around in the sunshine never really was my thing. I think I hit my limit at two full days. I don’t think I could hang around in one spot for any longer. I’d have ended up going up to Limone to get a fresh take on the area and see some more sights.

Anyway, that wasn’t an issue. Pointing the bike roughly north west the next morning would get us to our next destination.

From here to Italy
The Trek back to Ireland

2 Replies to “Around Lake Garda”