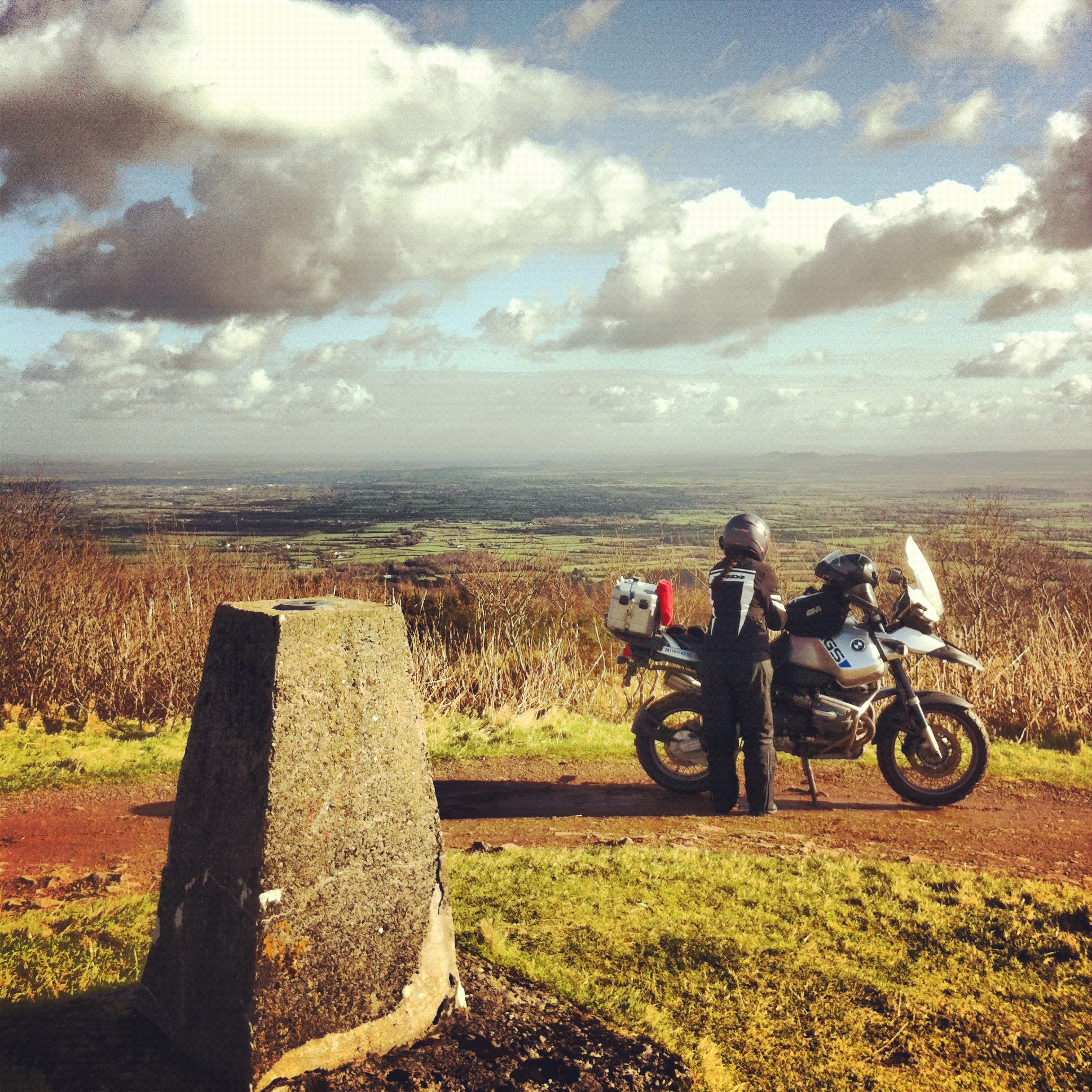 Insurance renewed, road tax paid. 6000 mile service not done but time to get photo rallying once again. We decided to start on Saturday and the trip out as far as Roscrea would work well given that I needed (wanted) to call into the home brew shop in Mountmellick to get some supplies (and another kit). Having ridden as far as Rathangan and completely forgot to stop at the rally point near Robertstown, we doubled back and eventually found the point after a lot of head scratching, swearing at the GPS and double checking with Google maps satellite photos.

No sooner had we parked up at Ballyteige Castle (that was the rally point) and taken a few photos that I noticed some rather menacing clouds coming our way. Bit of rain, no big deal. No. Horizontal snow/sleet/ice and lots of it. Admitting defeat fairly early on in the snowstorm, we packed up and headed back to Dublin, stopping occasionally to wipe the one inch accumulation of snow off the windscreen of the bike. Fun times.

So we tried again the next day. The weather was significantly better.

Capard ridge trig pillar near Mountmellick. I still don’t have a good understanding of what a trig pillar is or was but I imagine it’s for measurement or performing some kind of calculation. If anyone wants to enlighten me, feel free. This point was reached by a fairly easily traversable muddy path. No fecking about avoiding the huge puddles, just roll on the throttle and power through them. Glad I hadn’t spent a couple of hours the previous week polishing the wheels and engine bars. Oh wait, I did.

The best was yet to come. One that we’d heard was abandoned when the group arrived at it. One that, now that we’ve done it, I’m sure will be abandoned by many who don’t wish to get half of north Tipperary encrusted onto their shiny machines. It’ll be equally abandoned by those who have an overwhelming fear of dropping their bikes. 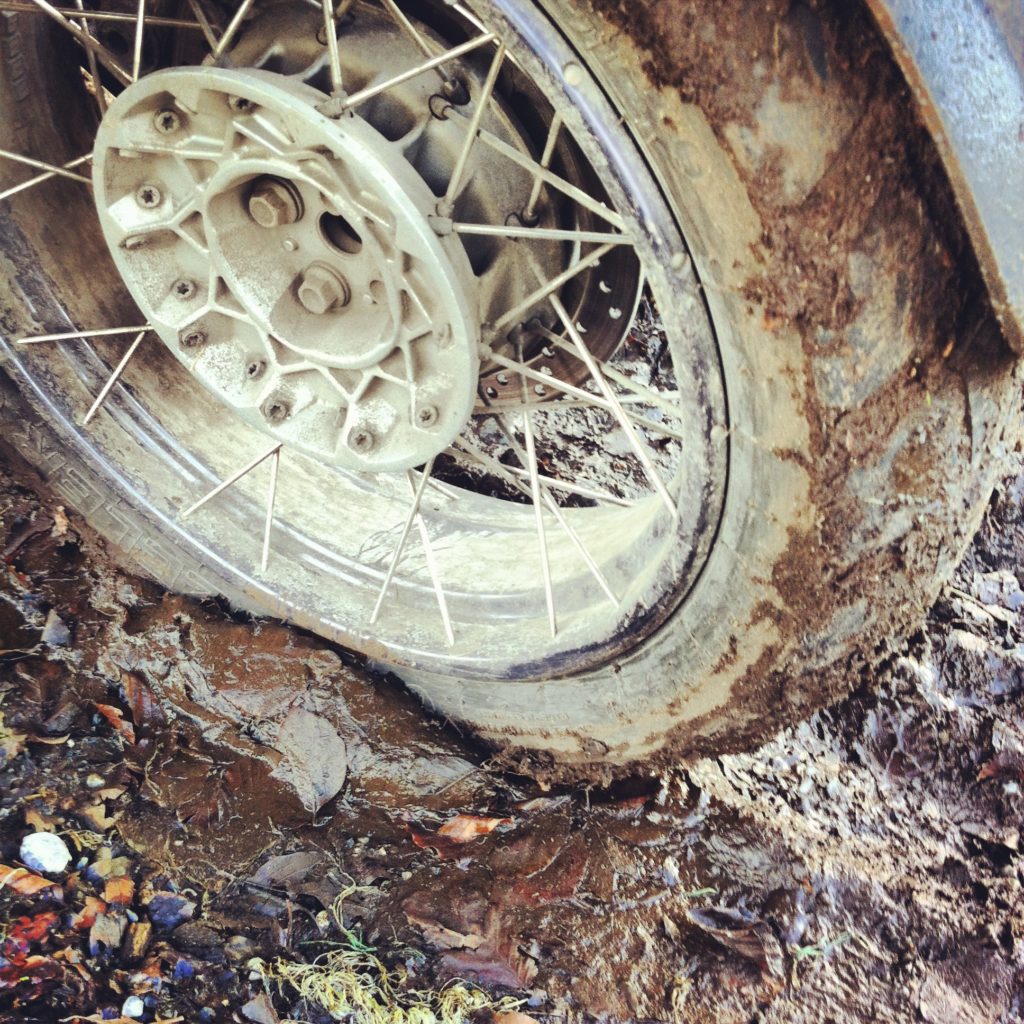 Monaincha Abbey, just outside Roscrea. Not much to say except ‘holy shit’. Last year the ‘off road offering’ involved getting your bike from a car park on the top of a hill up a dry stony path. The stakes have been well and truly raised this year. If you make it through the first muddy path, through all the puddles, past all the ruts and avoiding the branches that want to smack you in the face when you ride by, you’re in for a treat. Through a gate into a field where the path as you knew it pretty much disappears. Instead you get muddy rut A or muddy rut B. Pretty much nothing to do except put down the power and see if you can keep the bike upright. Then you get to step off the bike and sink down to your ankles. Now this is photo rallying at it’s finest! I was almost tempted to sit at the abbey and wait for someone to turn up on a Goldwing. Yes, us GS owners are a smug lot. Self-entitled too!

I will freely admit to preferring the sweep and camber of a nice bit of bone dry tarmac over a soggy, torn up farmers field any day. This mostly comes from riding into said soggy fields, dropping the bike and realising it’s not that easy to pick back up. My off roading is henceforth to be put on the back burner until such time as I get a bike that weighs about a third of the GS and has knobbly tyres on it. End of story.

From Roscrea, back onto the N roads and toward Carlow. My favorite town in all of Ireland. Oh yes. Sarcasm, me? After trying to get around the road works and truly awful drivers (of which there were many) in the town, we headed to the Carlow/Kilkenny point at Old Leighlin. Time was pressing on so this was a quick one. The locals also seemed to be puzzled at our presence. Someone better tell them to expect hundreds more bikers before the year is out.

The evening was drawing in and our plan (well, my plan) of squeezing in the Wicklow point (near Blessington) before night fall was doomed. Thankfully it’s on a route we regularly take for a Sunday spin anyway, so no harm done. The rest of the journey was spent avoiding nyctalopic idiots driving at 40kph and of course the flurry of people you usually get when out riding that are unusually and unreasonably aggressive towards bikers.