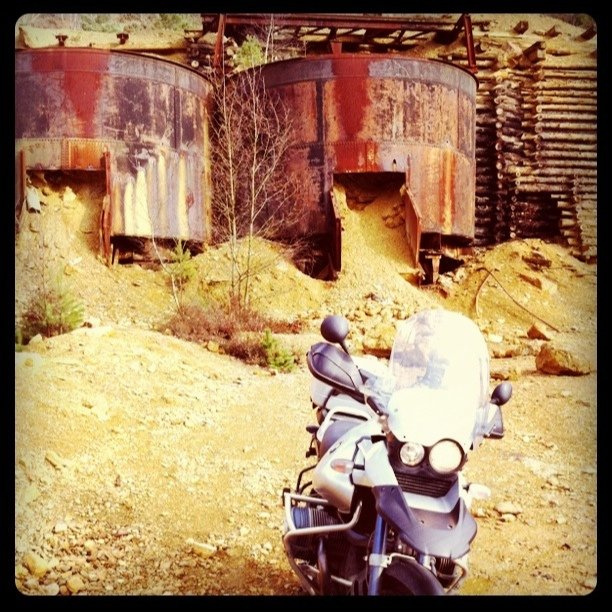 Buying a bike in January is exquisite torture. Mostly because with the shitty weather, you can’t actually get out and have a proper spin until mid February. It was still a bit too cold to enjoy thoroughly (a fact which I discovered to it’s fullest extent after I removed my helmet at Newcastle beach) and the dark clouds that hung over great portions of the journey appeared as if they might decant a biblical quantity of rain on me at any moment.

Wicklow is an amazing spot; It’s my west Cork away from home. Mountains, lakes, valleys and the all important poorly piloted rental cars creeping around as if their tyres are made of finest crystal. So just like west Cork and Kerry in the summer.

I started, quite predictably, by easing my way around the Sally Gap. Moved on down the Vale of Avoca where I found the copper mines after missing the turn initially. The resulting photos from the walk that was held down that way some time back made me instantly regret that I’d missed that outing.

I also quickly discovered a taste for off-road riding, taking a somewhat sketchy route up a road just to see what was at the top. Nothing, but the balls to the wall ride made finding out nothing was up there was entirely worthwhile.

Down through Avoca, onto the Arklow direction via some roads that I’m not entirely sure were for public use. I only say that given the amount of horse trailers and tractors I passed on the route. You know you’ve just gone far enough outside a major city when two vehicles are blocking a narrow road and they grant you the huge favor of allow you to pass. Ditto to the horse trailer driver who’s truck was blocking three quarters of a narrow road and he blocked the remaining quarter by standing in it filling out paperwork. Maybe I’m too patient, I sat there for two or three minutes while he finished, strolled out of the way and waved me on as if to say ‘there you go, you may pass now’. For a moment, I was in Kilgarvan.

For the record, I took a ‘proper’ camera with me but I think I only took about 10 photos with it. When they do eventually get looked at, they’ll appear on the flickr set along with the iphone photos.

Anatomy of work travel
Place to be