Part 7: The scenic route back to France 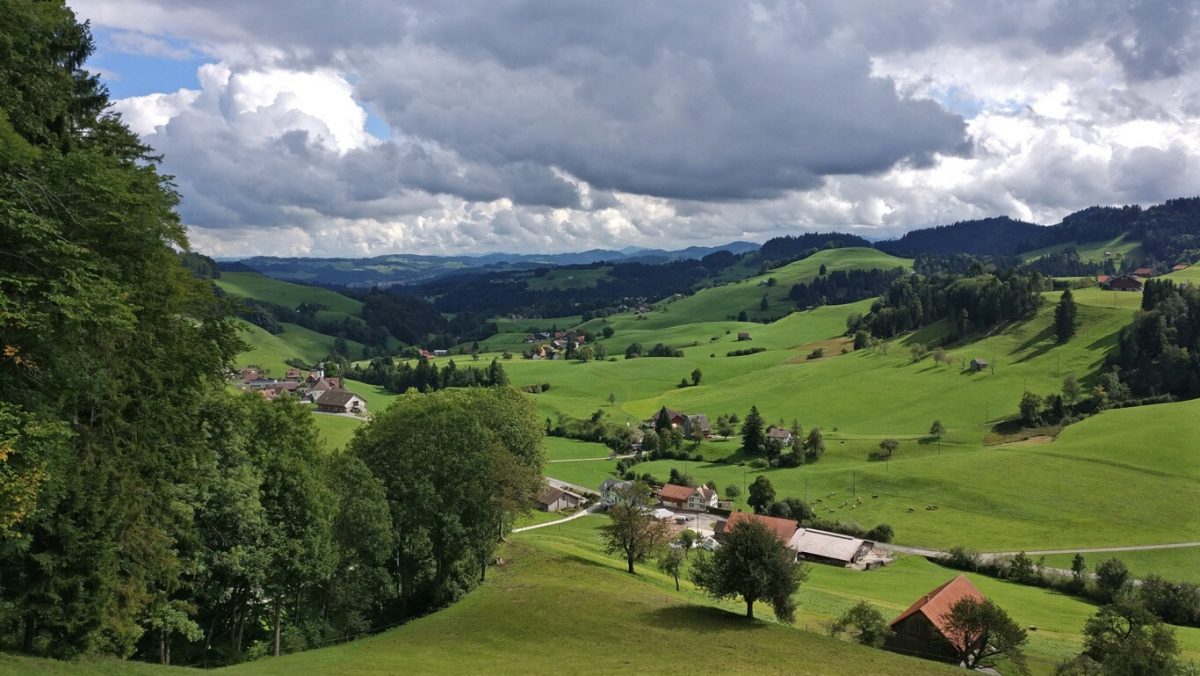 I woke the following morning to what must have been an answered prayer, it wasn’t as cold as it was supposed to be, and certainly not as cold as it’d been the previous few mornings. There was a stint of hasty packing completed, followed by one final eggy bacon buttery breakfast and enough coffee to temporarily incapacitate a horse. The original plan, which was to exit the Tyrol valley and Austria via the Silvretta pass, was very much still on.

Bike packed and getting ready to pay my bill, I ended up chatting to the proprietor of the hotel for a few minutes. The key takeaway from the conversation was that it was unnaturally cold and snowy for this time of the year. Normally they’d only get this kind of weather much closer to winter. Good to know it was specially reserved for my arrival. 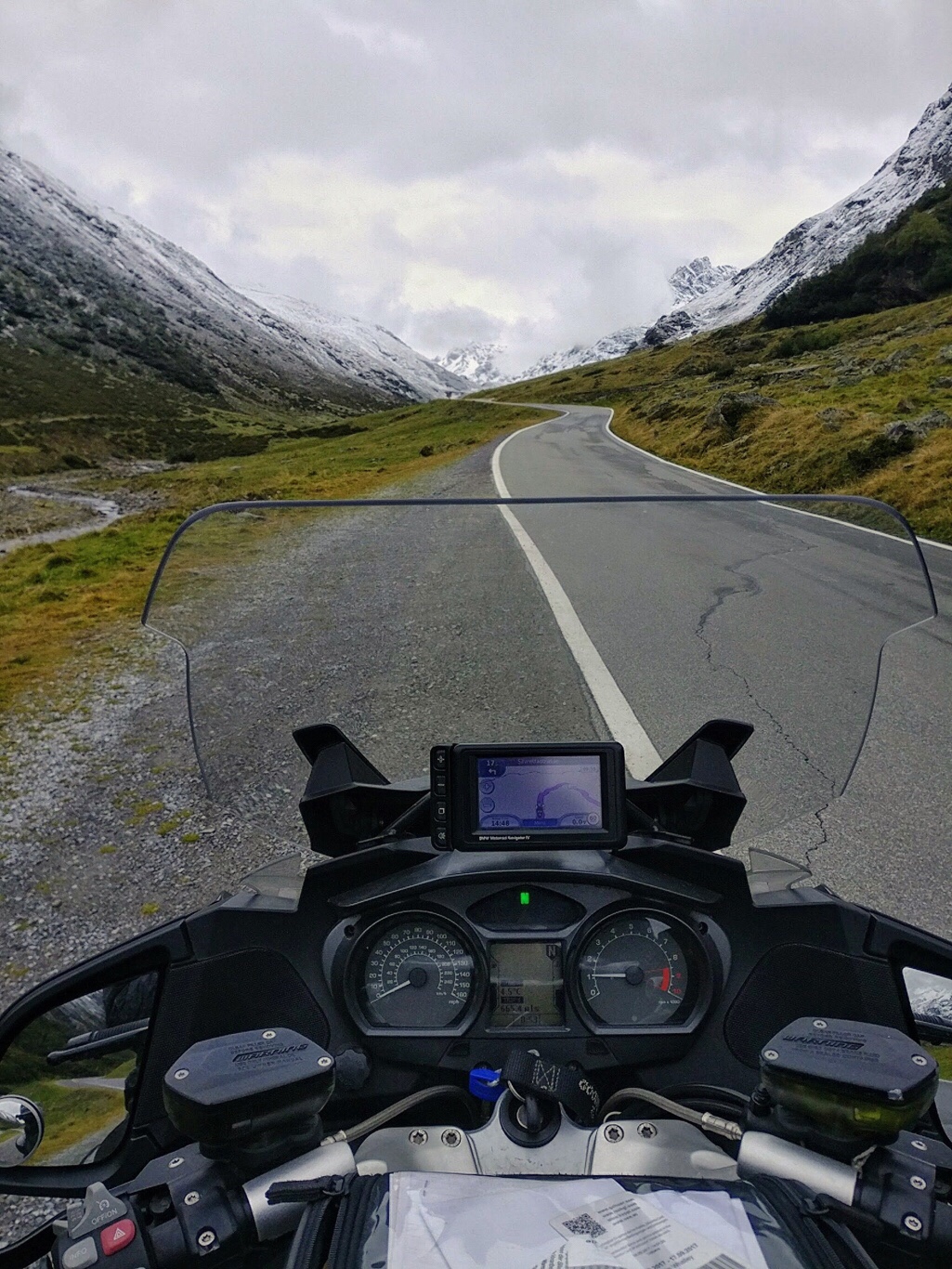 One more jaunt over the Silvretta then, as if I hadn’t already well and truly ripped the heart out of it the previous afternoon. I took the time to thoroughly enjoy the last of my time in Austria and despite the cold, the rain, the snow and ice, I left hoping that I’d be able to get back soon. Just, in nicer weather.

The plan, as it usually is, was to avoid as much motorway as possible. That was as much for financial reasons as for hoping for a laid back jaunt over several borders and onto my final destination. My very brief encounter with the Austrian motorway in days past made me wary of getting near any major roads, lest I accidentally (or more likely through my own stupidity) end up back on a section of paid motorway and feel the wrath of whatever state body looks after punishing tourists that thought they could get away without purchasing vignettes. But that’s neither here nor there.

Onward through the valleys of Austria until, where am I? Things just changed all of a sudden. Even the lines on the road look different. Strange license plates on cars. Ahh, Lichtenstein! I had about as much time as it took to realise that I had crossed the border before I crossed yet another border into Switzerland.

The original plan, back when I was in ‘hasty plan making mode’ before setting off on this possibly ill-advised trip, was to spend the remainder of today riding around Switzerland, doing some of the lower mountain passes and conveniently end up in an awesome looking B&B/restaurant near Wassen. Then spend the evening packing myself with as much Swiss cheese and wine as inhumanly possible. But alas, that would have cost me an extra day when extra days were a little hard to come by. Next time Switzerland, next time.

I crossed into the country somewhere near Vaduz and blindly followed my poorly created GPS route in the general direction of Shaffhausen, a point picked for the sole reason that it reminded me of the movie “Dirty Rotten Scoundrels”. Poor old Ruprecht.

To say I enjoyed my brief time in Switzerland would not be unlike saying I’m fond of the occasional beer. If I was to attempt to describe even a minute percentage of how bafflingly beautiful the country is, I’d be gilding the Lilly. If you’ve been there, you know. If you haven’t been there, for the love of God go there. I stopped all too frequently in out of the way places not to take photos, shout at the GPS or eat some of the stash of sweets & biscuits I had in the tank bag, but just to stop. To turn off the engine and bask in the glorious, enveloping silence. That and to gape open-mouthed at the hills and valleys. I’m not exactly a seasoned world traveler, but it’s easily one of the most beautiful countries I’ve ever had the pleasure to spend time in. Every time I go, I wonder why I don’t go more. Every time I leave, I make plans to go back. 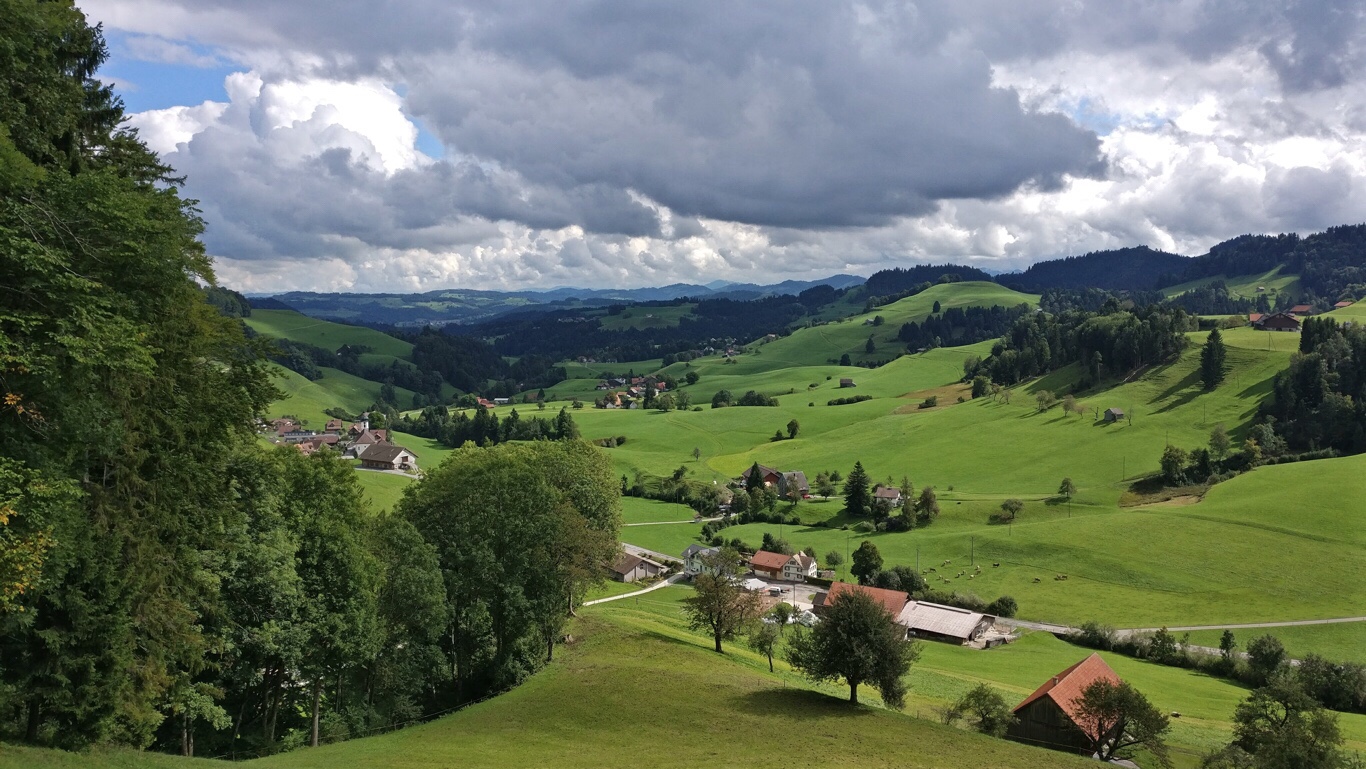 As all good things have a tendency to do, this too passed and before very long I was riding alongside the Rhine. Enjoying the scenery again and watching the ships as I rode, I followed the river as far as Koblenz before eventually taking the opportunity to cross back into Germany and onto the B500. After spending much of the day on narrow, winding roads at 30-50kph, it was refreshing to be climbing out of Koblenz on a four lane, 100kph road. I took full advantage. As with my jaunt through Switzerland, Germany was a transit to leave me in my final destination for the evening, the Alsace region of France. Long day, but a long enjoyable one.

The sky was blue and dotted with white fluffy clouds. There was a light breeze. Everywhere except where I was going. I was headed into an almost completely black mass of thunderstorm cloud. So that was nice. I had to stop to put on every piece of waterproof clothing I had with me, in the hope that once I got to France, I’d only be marginally soaked to the skin. I took the opportunity to stop at a petrol station and fill the bike before pulling on my wet gear. As luck would have it, the shop was fully stocked with that wonderful mix of cola and orange I’d bought almost by accident a few days previous when entering the Black Forest. It must be a German thing. A German thing I very much enjoy.

The rest of my German journey passed without the need for much comment. When faced with certain soaking and a practically unlimited amount of time to get where you’re going, you end up making a sort of game out of it and try to avoid going too far in the direction of the nasty, black clouds. Reached Freiburg, which based only on riding through the outskirts of the city, looks like a very nice place indeed. Another one on the list of places to hopefully get back to some day. Potentially mixed in with a future photography visit to the Black Forest.

Once more over the Rhein. I rode over a few large bridges, lined with people watching the ships navigating what appeared to be locks on the river. I wanted to stop and take a few minutes, but my aching buttocks wouldn’t allow it. A kind of “if you get off this bike, we’re not going to allow you to get back on” and “also, good luck straightening your legs”. So instead of treating the locals to my horrid, blood curdling screams while dismounting the bike, I rode onward into France. Even before I crossed the border, the familiar smell of the vines and fruit trees that filled the air was, to me at least, not unlike being slapped about the face with a “Welcome to France” postcard. It drove me onward for the final few miles, knowing that great things were ahead.

The destination was Ribeauville. My reasons for picking this place were numerous and varied. None of which I’m going to elaborate on at this point. All things will become clear. During a previous visit to the Alsace region, we had picked a charming hotel in Riquewihr without fully understanding the nature of the town. It’s a town that completely shuts down once all the tourists have departed for the evening. Even the vending machines won’t serve you. Ribeauville, slightly north of Riquewihr, seemed to be a larger and busier town, so I thought I’d give that a try. 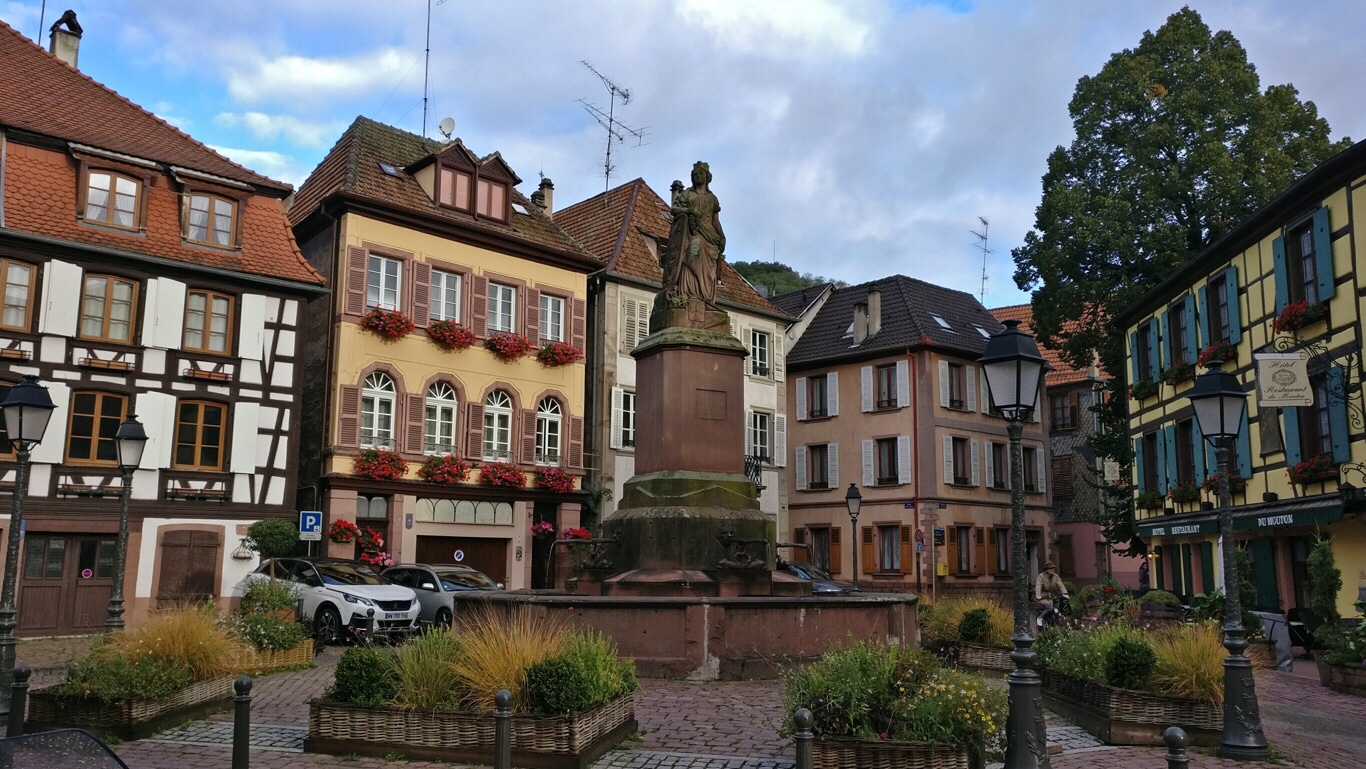 As with many of these types of towns, I arrived via a side street and was quite unsure if I was supposed to be riding on the small, cobbled and tourist packed street I was on. Dirty looks from visitors were the norm. I walked around a bit and found the hotel (Hotel Au Lion), before enquirers about where I should leave the bike for the evening. Side note; Great to be back in a country where I can make myself understood and understand what is being said to me. Some of it anyway. Turns out, my parking spot was “wherever you want, maybe right outside the hotel door”, the instructions delivered in a uniquely French, why the hell are you asking me stupid questions kind of way. So now I needed to return to my bike and unashamedly ride through hordes of people who don’t seem to grasp the concept of this being a road, not a pedestrian right of way. I’d usually take a moment in this scenario and wait for a local to barrel up the road in their clapped out Renault, thereby clearing the way for me. Sadly, no locals coming home from work just yet so I was on my own.

Parking space secured and as I was unpacking, a short conversation with a friendly Dutch man about the BMW he used to have when he was a younger man. Always nice when being on a bike prompts nice people to come and talk to you. It seems to cancel out the semi-permanent resting bitch face I have, so people will actually come and talk. Once more for the back of the room, I’m not permanently pissed off, it’s just my face.

What was that though, great things were to come? Oh yes, bit off track there. Checked in, showered and changed and strolled back down the cobbled street to find a shop selling every shape and flavour of Pain d’epices, so I could bring something home for Julie. Apart from wine. More on that later. Off track again, back to the great things. After milling around waiting for the hotel restaurant to open, I was seated in the empty room and took exactly four tenths of a second to look at the menu. I’m not exactly sure why I even opened it in the first place. Good lady of the house, bring me all the Choucroute and Gewurtztraminer you have in the building.

Suitably packed with a multitude of meats, I waddled off back outside into the evening air for a short stroll to aid the digestive process. Soon found out that Ribeauville is exactly like Riquewihr, completely devoid of human life after 6:30pm. At least they’re consistent I suppose.

After scouting the locations of several promising boulangeries (boulangers?) for breakfast, I retired to my bed and slipped into a deep meat coma, the likes of which only ever seem to happen in the best parts of France.